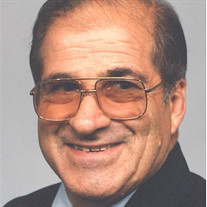 Edward Christopher Morrone, 90, of Drury/Florida, Massachusetts, passed away on January 30, 2019. He was born to parents Christopher and Concetta (Ranfone) Morrone, on May 12, 1928, in East Haven, Connecticut. Edward was a U.S. Army Veteran serving in post-war Germany. He worked for the New Haven Railroad as an electrician and then embarked on a long career as a contractor, developer and builder. He worked as a construction manager for Stanley Warner Theaters and had his own construction and development companies in Connecticut, New York and Saint Croix. He became an accomplished Hospital Engineer working at Gaylord Hospital, Meriden-Wallingford Hospital and retired from Milford Hospital. Edward is survived by his loving wife of 43 years Carolyn (Cosick) Morrone, his daughters Gail Morrone and Patricia Morrone, Step-son Ted Shreve, and grandchildren Tabitha Morrone Koscinski, Thomas Shreve, and Natalie Shreve. He is also survived by a loving extended family that he cared for deeply. Edward was predeceased by parents Christopher and Concetta Morrone, brothers Peter Morrone, Victor Morrone, George Morrone and Sisters Mary Morrone Buonome, and Nancy Morrone. Edward was known for his love of music. He played and taught others the organ. He was an avid boater for many years and served as a Commander of the Meriden Connecticut Power Squadron. He was known for his service to others. Often taking on building and repair projects for friends, family and others for no cost. Mostly he was known as loyal and loving to his family and his friends. The funeral will be held on Friday February 8th at 11:30 A.M. from the PACIOREK FUNERAL HOME, 13 Hoosac St., Adams, followed by a Liturgy of Christian Burial at 12:00 Noon in St. Stanislaus Kostka Church, Adams. Burial will be in the spring in Florida Church Cemetery. A calling hour will be Friday morning from 10:30 A.M. to11:30 A.M. at the funeral home. The family requests that people make donations in support of The Second Chance Animal Center of Bennington Vermont, 1779 VT Route 7A, Arlington, VT 05250 or online at www.2ndchanceanimalcenter.org , in lieu of sending flowers.

Edward Christopher Morrone, 90, of Drury/Florida, Massachusetts, passed away on January 30, 2019. He was born to parents Christopher and Concetta (Ranfone) Morrone, on May 12, 1928, in East Haven, Connecticut. Edward was a U.S. Army Veteran... View Obituary & Service Information

The family of Mr. Edward C. Morrone created this Life Tributes page to make it easy to share your memories.

Send flowers to the Morrone family.