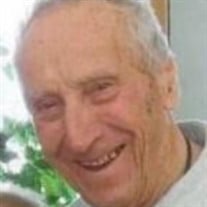 Mr. Edward D. “Seaward” Critelli, 89, of Adams, died Thursday morning, February 17, 2022, at North Adams Commons. He was born in North Adams on November 26, 1932, a son of the late Victor and Helen (Callahan) Critelli and attended North Adams schools. Seaward worked as a blaster at Pfizer, Inc. in Adams until retiring after 38 years of service. He had been a communicant of St. Thomas Aquinas Church, Adams, and was a member of the Adams Lodge of Elks. He enjoyed hunting, fishing, horse racing and playing cards. He also enjoyed bicycling and working out at the YMCA gym. He especially loved spending time with his family. He is survived by his wife of nearly 67 years, the former Lorraine Dellaghelfa, whom he married on April 30, 1955; two sons, Steven Critelli and his wife, Tina, of Adams, and Gary Critelli and his wife, Laurie, of Saratoga Springs, NY; four grandchildren including Ashley Critelli, Peter Critelli and his wife Jessica, Kim Critelli and her partner Scott Carpenter, and Breanna Mitchell and her husband, Thomas; one great grandchild, Jade Mitchell; as well as several nieces, nephews, grandnieces and grandnephews. He weas predeceased by his three brothers, Richard, Albert and Robert Critelli; and by his sister, Frances Costa. The funeral will be held on Tuesday, Feb. 22nd, at 11:00 AM in the PACIOREK FUNERAL HOME, 13 Hoosac St. Adams. Burial will follow in Bellevue Cemetery, Adams. A calling hour will be Tuesday from 10:00 AM until the service at the funeral home. It is requested that anyone attending the funeral wear a face mask while inside the building. In lieu of flowers, memorial donations may be made to St. Jude Children’s Research Hospital, 501 St Jude Place, Memphis, TN 38105. To leave a message of condolence, please go online to www.paciorekfuneral.com

The family of Mr. Edward D. Critelli created this Life Tributes page to make it easy to share your memories.

Send flowers to the Critelli family.