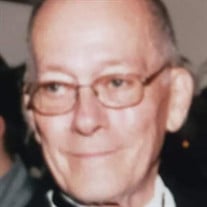 Mr. Edward R. Armstrong, 84, of Adams, died Thursday evening, April 16, 2020, at his home, surrounded by his loving family. He was born in Pittsfield on January 21, 1936, a son of the late Edward and Mary (Speth) Armstrong. He attended Pittsfield schools, and graduated from Pittsfield High School. Ed served with the US Army, and continued working full-time with the Massachusetts Army National Guard at the Adams and North Adams Armories until retiring on July 1, 1992 as a Sergeant after 38 years of service. Following his retirement, Ed worked part-time at the former Big Y Supermarket in Adams, and was also active with the Veterans Outreach Center. He also worked part-time as a bartender at several local taverns. He was a member of the Adams Lodge of Elks, Adams Post 160 American Legion, and the Adams Turners. He was an avid reader, and enjoyed bowling, and especially enjoyed spending time with his grandchildren. He was a lover of history, and was a World War II buff. He is survived by his wife, the former Pearl T. Benson, whom he married on January 17, 1968; his children, Pearlann M. Armstrong and her spouse, Lisa Armstrong; Edward R. Armstrong, Jr. and his spouse, Jill Armstrong; Joanne Armstrong, Brian Armstrong, Eileen Haggerty, Judith Plankey, Scott Armstrong, Richard Armstrong, William Bailey, Corinne Morrison, Donald Morrison, Kevin Morrison, Michelle Morrison, Babette Briggs and Shawn Morrison; as well as many grandchildren and great grandchildren. Funeral services will be held on a date to be announced in the future, when current restrictions are lifted. Memorial donations may be made to Soldier On, 360 West Housatonic St. Pittsfield, MA 01201. The PACIOREK FUNERAL HOME, Adams, is in charge of arrangements. To leave a message of condolence for Ed’s family, please go online to www.paciorekfuneral.com

Mr. Edward R. Armstrong, 84, of Adams, died Thursday evening, April 16, 2020, at his home, surrounded by his loving family. He was born in Pittsfield on January 21, 1936, a son of the late Edward and Mary (Speth) Armstrong. He attended Pittsfield... View Obituary & Service Information

The family of Mr. Edward R. Armstrong created this Life Tributes page to make it easy to share your memories.

Send flowers to the Armstrong family.