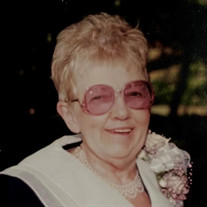 Mrs. Edith Catherine (Deane) Ames, 96, of North Adams, died Monday, November 22, 2021, at Berkshire Medical Center in Pittsfield. She was born in North Adams on December 27, 1924, daughter of the late John and Evelyn (Wing) Deane and attended North Adams schools. Edith last worked at the former Sprague Electric Co. in North Adams for 20 years until retiring. She was a communicant of the former St. Francis of Assisi Church in North Adams and was a member of the former Cartier Club in Adams. She enjoyed knitting, crocheting, and travelling to flea markets. Her husband, George E. Ames, Sr., whom she married ion June 4, 1960, died on May 30, 2014. She is survived by her son, George E. Ames, Jr. and his wife, Denise, of North Adams; two grandchildren, Payton and Brenden; a nephew, Christopher Jones of North Adams, as well as several other nieces and nephews. She was predeceased by a sister, Dorothy Deane. Funeral services and burial will be private. There are no calling hours. The PACIOREK FUNERAL HOME, Adams, is in charge of arrangements. To leave a message of condolence, please go online to www.paciorekfuneral.com

The family of Mrs. Edith C. Ames created this Life Tributes page to make it easy to share your memories.

Send flowers to the Ames family.