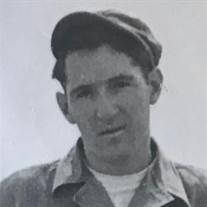 Mr. Earl Leonard Ramsdell, 91, of Adams, died on Thursday, April 2, 2020 at Williamstown Commons due to complications of the COVID-19 Virus. He was born in Pittsfield on October 15, 1928, a son of the late Charles and Elizabeth (Goodfellow) Ramsdell. He attended schools in Adams and graduated from the former Adams High School. Mr. Ramsdell was a Veteran of the Korean Conflict, having served with the United States Army until receiving his Honorable Discharge on December 20, 1952. Mr. Ramsdell last worked as a bus driver for the Dufour Bus Company until retiring in 2010. Earlier he had been the proprietor of the former Erl’s Auto Sales in Adams until 2000. He was a communicant of the Parish of St. John Paul II at Notre Dame des Sept Douleurs Church, Adams. He is survived by his wife of 57 years, the former Leona M. Charbonneau, whom he married on April 20, 1963; one son, Thomas Ramsdell and his wife Christine of North Adams; one daughter, Tammy McCarthy and her husband Travas of Williamstown; three grandchildren, TJ McCarthy and his wife Aimee, Naomi McCarthy and Amanda Ramsdell and her fiancé Michael Banks; one brother, Richard Ramsdell and his wife Janice; four sisters, Ann Klammer and her husband Donald, Rosemary Ziarnik, Lucille Candilloro and Doris Guillou as well as many nieces and nephews. He was predeceased by a brother William Ramsdell. Funeral services and burial will be private for the family. There are no calling hours. Memorial donations may be made to the COVID-19 Emergency Response Fund for Berkshire County through the Berkshire United Way, 200 South St., Pittsfield, MA 01201 or to St. Jude Children’s Research Hospital, 501 St. Jude Place, Memphis, TN 38105.

Mr. Earl Leonard Ramsdell, 91, of Adams, died on Thursday, April 2, 2020 at Williamstown Commons due to complications of the COVID-19 Virus. He was born in Pittsfield on October 15, 1928, a son of the late Charles and Elizabeth (Goodfellow)... View Obituary & Service Information

The family of Mr. Earl L. Ramsdell created this Life Tributes page to make it easy to share your memories.

Send flowers to the Ramsdell family.