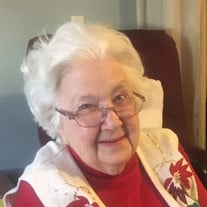 Dorothy B. (Roemelt) Leary, 97, passed away peacefully at Brookdale South Bay in South Kingstown, Rhode Island on Monday, September 23, 2019. Dorothy was born in Adams, Massachusetts on July 25, 1922, the first child of Herbert G Roemelt and Emma (Fischer) Roemelt. Dorothy and Arthur E. Leary married April 15, 1944 and were married for 42 years until his passing in 1986. Dorothy is survived by her two daughters; Linda Hamm of North Royalton, Ohio and Bonnie Seekell of North Kingstown, Rhode Island. Dorothy also leaves behind four grandchildren and their spouses and six great grandchildren throughout the U.S. and abroad. Dorothy had a varied career, working first at the GE in Pittsfield and then at the Bay State, a clothing house in Adams, for which she had fond memories even later in life. When the Bay State closed she worked at Waverly Fabrics in Adams. Dorothy was an active member of the Adams community, volunteering with Girl Scouts and 4-H. She was a member of the American Legion Auxiliary and active as a parishioner of St Mark’s Episcopal Church, where she was a Sunday School teacher for years and a member of the Women’s Guild. After St. Mark’s merged with All Saints Church in North Adams, Dorothy continued her involvement with volunteer activities. Dorothy had a warm and generous spirit and was greatly loved throughout her life by those who knew her well. She will be profoundly missed by those she leaves behind. Funeral services will be held on Tuesday, October 1st, at 11:00 AM in the PACIOREK FUNERAL HOME, 13 Hoosac St. Adams. Rev. Nathaniel Anderson, Rector of St. John’s Episcopal Church, Williamstown, will officiate. Burial will follow at Bellevue Cemetery, Adams. Calling hours will be Tuesday morning from 10 to 11 AM at the funeral home. Memorial donations may be made to All Saints Episcopal Church, P.O. Box 374, North Adams, MA 01247; or to Hope Hospice of Rhode Island, 1085 North Main St. Providence, RI 02904. To leave a message of condolence, please go online to www.paciorekfuneral.com

The family of Mrs. Dorothy B. Leary created this Life Tributes page to make it easy to share your memories.

Dorothy B. (Roemelt) Leary, 97, passed away peacefully at Brookdale...

Send flowers to the Leary family.