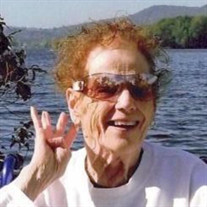 Mrs. Doris Jeannette (Daigneault) Lussier, 89, of Clarksburg, died Thursday afternoon, September 10, 2020, at North Adams Commons. She was born in Adams on August 1, 1931, a daughter of the late Joseph and Katherine (Scott) Daigneault. She attended Adams schools, graduating from the former Adams High School with the Class of 1950. Doris last worked as a data processor at the former Sprague Electric Co. in North Adams until retiring. She had been a communicant of St. Elizabeth of Hungary Church, North Adams, and Notre Dame des Sept Douleurs Church in Adams. Her husband, Ernest N. “Babe” Lussier, whom she married on October 28, 1950, died on June 9, 2013. She is survived by three sons, Richard Lussier and his companion, Alice Vigna; Thomas Lussier and his wife, Tammy; and David Lussier and his companion, Kristen LaFleur, all of Clarksburg; one brother, Norman Daigneault of Adams; five grandchildren, several great grandchildren, one great great grandchild, and several nieces, nephews, grandnieces and grandnephews. She was predeceased by a grandson, Richard Lussier, Jr., three brothers, Joseph, Lawrence and Raymond Daigneault, and a sister, Rita McLear. A graveside funeral service will be held on Thursday, Sept. 17th, at 11:00 AM in Bellevue Cemetery, Adams. Due to current public health regulations, wearing of face masks and social distancing will be strictly enforced. There are no calling hours. Memorial donations may be made to Elder Services of Berkshire County, 877 South St. Suite 4 E, Pittsfield, MA 01201, or to any charity of the donor’s choice. The PACIOREK FUNERAL HOME, Adams, is in charge of arrangements. To leave a message of condolence, please go online to www.paciorekfuneral.com

The family of Mrs. Doris J. Lussier created this Life Tributes page to make it easy to share your memories.

Send flowers to the Lussier family.