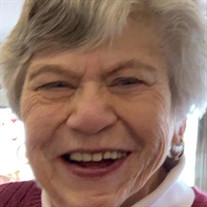 Mrs. Denise Annette (Beauchemin) Howard, 84, formerly of North Adams, died Wednesday morning, November 10, 2021 at St. Joseph’s Hospital Health Center in Syracuse, NY. She was born in Westfield, MA on May 31, 1937, the daughter of C. Armand and Elda (Bresbois) Beauchemin. She attended North Adams schools, graduating from the former St. Joseph’s High School in 1955. Denise last worked as a paraprofessional at Greylock School in North Adams. Earlier, she had worked at Central Radio and the former Jack and Harry’s, both in North Adams. She had been a communicant of St. Elizabeth of Hungary Church, and the former Notre Dame du Sacre Coeur Church, North Adams. She enjoyed spending time with her family and attending her grandchildren’s sporting and school events. Her husband, Willian L. Howard, whom she married on September 12, 1959, died on February 23, 2014. She is survived by two sons, Keith Howard, of Adams, and Brian Howard and his wife, Barbara, of Manlius, NY; three grandchildren, Kevin, Stefanie and Alexandra “Ally” and several nieces and nephews. The funeral will be held on Monday, Nov. 15th, at 10:00 AM in the PACIOREK FUNERAL HOME, 13 Hoosac St. Adams. Burial will follow in Southview Cemetery, North Adams. Calling hours are Sunday afternoon from 2 until 4 PM in the funeral home. Memorial donations may be made to any charity of the donor’s choice. To leave a message of condolence, or for directions, please go online to www.paciorekfuneral.com

The family of Mrs. Denise A. Howard created this Life Tributes page to make it easy to share your memories.

Send flowers to the Howard family.