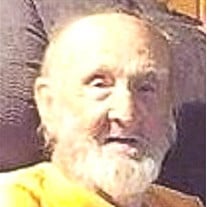 Mr. David C. “Mickey” Hyndman, 90, of Adams, died Wednesday afternoon, March 6, 2019, at Baystate Medical Center in Springfield. He was born in North Adams on May 5, 1928, a son of the late David and Elizabeth (Thompson) Hyndman, and attended North Adams schools. He was a Veteran of both World War II and the Korean War, serving with the US Navy in the Pacific Theater from 1946 until his Honorable Discharge in 1947. He then enlisted in the US Air Force, serving until his Honorable Discharge in 1953. While serving with the Navy, he witnessed the first atomic bomb test detonation over Bikini Atoll in the South Pacific in July of 1946. Mr. Hyndman last worked for the Massachusetts Department of Public Works, retiring 25 years ago. David and his family were well known for raising Scotch Highland Cattle for many years. He enjoyed reading western novels, Native American history, crossword puzzles, and fixing most anything. While living in California during his military service, he won championship titles in Jitterbug dancing and Golden Glove boxing. His wife, the former Joan F. Horn, whom he married on May 7, 1955, died on October 21, 2004. He is survived by his two daughters, Suzan Hyndman and Stella Hyndman, both of Adams; a sister, Evelyn “Lulu” Hyndman of North Adams; three grandchildren, Danyelle Lango and her husband, Michael, of Winter Haven, FL; David c. Hyndman of Boston; and Dominique Hyndman of Adams; one great grandson., Joshua Lango of FL; as well as several nieces and nephews. He was predeceased by his brother, James; and by his sisters Isabelle, Daisy, Catherine and Jane. Funeral services will be held on Tuesday, March 12th, at 2:00 PM in St. John’s Episcopal Church, 35 Park St. Williamstown. The Rev. Nathaniel S. Anderson, Rector, will officiate. Relatives and friend are invited to attend. Burial will be held later in the spring in Bellevue Cemetery, Adams.. There are no calling hours. Memorial donations may be made to St. Joseph Indian School through the funeral home, or online at stjo.org

The family of Mr. David C. Hyndman created this Life Tributes page to make it easy to share your memories.

Send flowers to the Hyndman family.