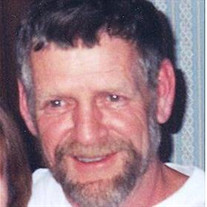 Mr. David Bassette, 65, of Savoy, died peacefully Tuesday evening, August 14, 2018, at Williamstown Commons, surrounded by his loving family. He was born in Adams on October 29, 1952, a son of the late Alfred and Barbara (Ladame) Bassette, and attended Adams schools. David worked as a groundskeeper at Berkshire Hills Country Club in Pittsfield for 22 years, until retiring in 2015. Earlier, he had worked at General Electric in Pittsfield for many years. David had been a member of the Savoy Volunteer Fire Dept. for many years, and enjoyed hunting and fishing. He is survived by his wife, the former Joan P. Sobon, whom he married on January 6, 1973; one son, David J. Bassette ( Katie) , of Adams; one daughter, Jessica Bassette ( Matt Sayers), of Hinsdale, MA; two sisters, Barbara Oleskiewicz (Joe) of Adams, and Bette Phelps (Hap) of New Ashford; four grandchildren, Dalton Bassette, Amanda Foster, Kaedyn Lavalle and Marissa Tribula; sisters-in-law Elizabeth (Sobon) DiPalazzo and Mary Bassette; brother-in-law John Sobon (Susan); as well as several nieces and nephews. He was predeceased by two brothers, Paul and William Bassette, and by a nephew, Daniel Phelps. Funeral services will be held on Saturday, August 25th, at 10:30 AM in the PACIOREK FUNERAL HOME, 13 Hoosac St. Adams. Deacon Gregory LaFreniere of the Parish of St. John Paul II will officiate. Burial will follow in Bellevue Cemetery, Adams. Calling hours are Friday, Aug. 24th, from 5 to 7 PM at the funeral home. In lieu of flowers, memorial donations may be made to the Savoy Volunteer Fire Dept., 17 Center Rd. Savoy, MA 01256. To leave a message of condolence, please go online to www.paciorekfuneral.com

Mr. David Bassette, 65, of Savoy, died peacefully Tuesday evening, August 14, 2018, at Williamstown Commons, surrounded by his loving family. He was born in Adams on October 29, 1952, a son of the late Alfred and Barbara (Ladame) Bassette,... View Obituary & Service Information

The family of Mr. David Bassette created this Life Tributes page to make it easy to share your memories.

Send flowers to the Bassette family.