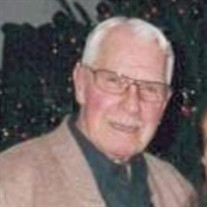 Mr. Clyde J. Horton, 96, of Adams, died on Tuesday, May 24, 2022. He was born in Pittsfield on March 9, 1926, a son of the late Alexander and Agnes (Loring) Horton. He attended schools in Adams and graduated from the former Adams High School. Mr. Horton worked for many years at the former Pfizer Corp in Adams as well as its predecessor the former New England Lime Co, retiring as the Environmental Control Manager in 1988. He had also worked as a school bus driver for Edward W. DeGere for 30 years. Music was Clyde’s soul, having played the piano, the accordion and drums starting in the school band. Later in life he started his own band, “Clyde Horton’s Orchestra” that would play in Massachusetts, Vermont and New York. He was a member of the Masons and the Shriners. He enjoyed building model cars, trucks and trains. He especially enjoyed vacationing in Maine. He is survived by his wife, the former Marion Hathaway, whom he married on November 20, 1948; his daughter, Gisele Torchia and her husband Frank of Adams; two granddaughters, Vanessa Cunningham and her husband Travis of Adams and Susan Reeners and her husband Brandon of Millis; one great granddaughter Sophia Cunningham; his dear friends Bill Wood and his wife Bev and Andy Moderski and his family, as well as many nieces and nephews. He was predeceased by his four brothers, A. Edward, Russell, Ralph and Lester Horton. The funeral will be held on Saturday, May 28th at 10:00 A.M. in the PACIOREK FUNERAL HOME, 13 Hoosac St., Adams. Burial will follow in Bellevue Cemetery, Adams. Calling hours are Saturday morning from 9:00 A.M until the time of the service. The family requests anyone attending to wear a face covering. Memorial donations may be made to the American Cancer Society, PO Box 1120, Framingham, MA 01701, Elder Services of Berkshire County, 877 South St., Pittsfield, MA 01201 or to Shriners Hospital for Children, 516 Carew St., Springfield, MA 01104.

Mr. Clyde J. Horton, 96, of Adams, died on Tuesday, May 24, 2022. He was born in Pittsfield on March 9, 1926, a son of the late Alexander and Agnes (Loring) Horton. He attended schools in Adams and graduated from the former Adams High School.... View Obituary & Service Information

The family of Mr. Clyde J. Horton created this Life Tributes page to make it easy to share your memories.

Send flowers to the Horton family.