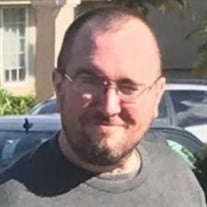 Chester Michael Trzcinski, died peacefully on May 2nd, 2021. Chester was born in Pittsfield, MA on October 7, 1977. He was the son of Chester J. Trzcinski and Stephanie (Cwalinski, Trzcinski) Mulcahy. He graduated from Hoosac Valley High school and received a degree in accounting from MCLA. Upon his graduation from college he moved to San Diego, where he lived for a few years. He enjoyed living near the beach with some of his closest friends; from high school, college, and new friends he met. While in San Diego he worked for Santa Barbara Bank & Trust, in the IT department. He relocated back to his hometown of Adams. He worked for Berkshire Bank and then worked for several years in the hospitality industry, last employed by The ‘6 House Pub. He liked a good game of chess, the New England Patriots and Boston Red Sox. He enjoyed music and attending the latest concert on the Phish tour. He had a tight group of friends, that he just loved spending quality time with. He always kept a sense of humor about him which was a quality that everyone who knew him cherished. He loved to face-time his nieces and nephew often. He especially liked it when his 2-year-old nephew Reece would say “done” and hang up on him. He is survived is by his parents- Chester and Stephanie: maternal Babci, Irene V. Cwalinski; his brother, Steve Trzcinski and wife Natalie Trzcinski; his nieces, Shay Alexandra and Cori Lynn Trzcinski; and nephew, Reece Chester Trzcinski; Godmother, Deborah McNamara; Godfather, Michael Cwalinski; several aunts and uncles; many cousins. He was predeceased by his paternal Babci and best friend, Regina M. Trzcinski and two grandfathers, Chester Trzcinski and Alexander Cwalinski. He also leaves behind his longtime friends Jeremy Duval and Liz (Hutchinson) Elliot. A private service will be held at a later date in July. Donations can be made to the Louison House, PO Box 773, North Adams, MA 01247. The PACIOREK FUNERAL HOME, 13 Hoosac St. Adams, is in charge of arrangements. To leave a message of condolence, please go online to www.paciorekfuneral.com

Chester Michael Trzcinski, died peacefully on May 2nd, 2021. Chester was born in Pittsfield, MA on October 7, 1977. He was the son of Chester J. Trzcinski and Stephanie (Cwalinski, Trzcinski) Mulcahy. He graduated from Hoosac Valley High school... View Obituary & Service Information

The family of Mr. Chester M. Trzcinski created this Life Tributes page to make it easy to share your memories.

Send flowers to the Trzcinski family.