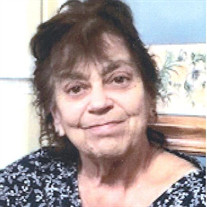 Mrs. Cherie A. (Neidzwiecki) Jennings, 68, of Cheshire, died on Friday, July 26, 2019 at Berkshire Medical Center in Pittsfield. She was born in North Adams on September 18, 1950, a daughter of the late Henry and Norma-Gene (Sutton) Neidzwiecki. She attended schools in North Adams and graduated from the former St. Joseph’s High School. She then attended the former North Adams State College. Mrs. Jennings last worked as an insurance broker for Coakley Pierpan Dolan & Collins Insurance Agency, North Adams. Earlier she had worked for Gallup & Casey Insurance and the former Price Chopper Supermarket in North Adams. Cherie was an avid bingo player. She enjoyed taking trips to the casinos, especially Foxwoods and Atlantic City and spending time at the beach. She is survived by her husband of 50 years, Bruce H. Jennings, whom she married on November 22, 1968. She was very proud to have celebrated their 50th anniversary at their son’s home in Florida. She is also survived by her son Matthew Jennings and his wife Sandra of North Port, FL; her daughter, Stacey Leigh Cote of Cheshire; two sisters, Rebecca Neidzwiecki of Falmouth and Susan Minasalli and her husband Charlie of North Conway, NH; five grandchildren, to whom she was a second mother, Jessica Cote, Coryssa Cote and her fiancé Scott Brandon, Samantha Cote and her fiancé Chris Burdick, Evan Jennings and Thomas Peterson and by five great grandchildren, Kyle, Dominick, Ryleigh, Aleigha and Logan. She was predeceased by her son-in-law Paul Cote. The funeral will be held on Wednesday, July 31st at 11:00 A.M. in the PACIOREK FUNERAL HOME, 13 Hoosac St., Adams, officiated by Rev. William D. Furey. Burial will follow in Cheshire Cemetery. Calling hours are Wednesday morning from 10:00 A.M. until the time of the service in the funeral home. Memorial donations may be made to the Hoosac Hose Company, P.O. Box 598, Cheshire, MA 01225.

Mrs. Cherie A. (Neidzwiecki) Jennings, 68, of Cheshire, died on Friday, July 26, 2019 at Berkshire Medical Center in Pittsfield. She was born in North Adams on September 18, 1950, a daughter of the late Henry and Norma-Gene (Sutton) Neidzwiecki.... View Obituary & Service Information

The family of Mrs. Cherie A. Jennings created this Life Tributes page to make it easy to share your memories.

Send flowers to the Jennings family.