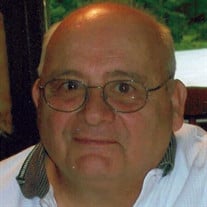 Mr. Charles P. Pansecchi, 81, of Adams, died Friday evening, May 1, 2020, at Berkshire Medical Center. He was born in Pittsfield, MA on August 2, 1938, a son of the late Joseph and Philipina (Barosso) Pansecchi. He attended Pittsfield schools, graduating from Pittsfield High School. He last worked as a third class engineer at the former Curtis Fine Papers Corp. in Adams until retiring in 2003, and enjoyed teaching other engineers the trade. Earlier, he had worked at the former Kimberly-Clark Corp. in Lee, the former Sprague Electric Co. in North Adams, and the former Adams Super Market and Arnold Print Works in Adams. He was a communicant of the Parish of St. John Paul II at the former St. Thomas Aquinas Church, Adams, and was a member of the Adams Turners, Forest Park Country Club, and the Berkshire Lodge of Masons. He was a longtime coach, head umpire and Vice President of the Adams Babe Ruth League, and had also been a basketball coach of the St. Thomas team of the Adams Church League. He was an avid bowler and golfer. He is survived by his wife of 60 years, the former Marijane McAndrews, whom he married on June 6, 1959; a daughter, Anne Long and her husband, Greg, of Miramar Beach, FL; two sons, Joseph Pansecchi and Fire Chief John Pansecchi and his wife, Sandra, both of Adams; a brother, Richard Pansecchi and his wife, Jane, of Pittsfield; five grandchildren, Anthony Pansecchi, Alison Pansecchi, Aundrea Pansecchi, Sarah Pansecchi and Nicholas Long; his brother-in law James McAndrews; his sister-in-law Ann Ciuk as well as several nieces, nephews, grandnieces and grandnephews. Due to current restrictions, funeral services and burial will be held privately. Memorial donations may be made to the Alert Hose Company, 3 Columbia St. Adams, MA 01220; or to Adams Ambulance Service, 185 Columbia St. Adams, MA 01220. The PACIOREK FUNERAL HOIME, 13 Hoosac St. Adams, is in charge of arrangements. To leave a message of condolence, please go online to www.paciorekfuneral.com

Mr. Charles P. Pansecchi, 81, of Adams, died Friday evening, May 1, 2020, at Berkshire Medical Center. He was born in Pittsfield, MA on August 2, 1938, a son of the late Joseph and Philipina (Barosso) Pansecchi. He attended Pittsfield schools,... View Obituary & Service Information

The family of Mr. Charles P. Pansecchi created this Life Tributes page to make it easy to share your memories.

Send flowers to the Pansecchi family.