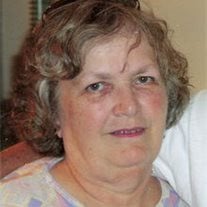 Mrs. Carol M. (Dickson) O'Keefe-Stachura, 66, of 14 Aztec Drive, North Adams, died early Sunday, February 18, 2007, in Fort Lauderdale, Florida, where she was vacationing. She was born in Philadelphia, Pennsylvania, on December 15, 1940, a daughter of the late Charles A. and Margaret M. (Gormley) Dickson. She attended Philadelphia schools, and came to North Adams in 1967. Mrs. O'Keefe-Stachura first worked for 15 years in the office at Williamstown Medical Associates. She then worked as a customer service representative for several local insurance agencies including Coakley, Pierpan, Dolan and Collins Insurance Agency in North Adams and Reynolds, Barnes and Hebb Insurance in Pittsfield, until retiring five years ago. She especially enjoyed spending her time with her family. She was predeceased by her first husband, William O'Keefe, and by her second husband, Richard Stachura. She is survived by 1 Daughter - Kathleen M. Bergeron, and her husband, Mark, of Adams; 2 Sons - William P. O'Keefe, Jr. of Bethel, CT and Kevin J. O'Keefe and his wife, Elizabeth, of North Adams; 2 Brothers - Robert Dickson of Warminster, PA and Arthur Dickson of Port Norris, N.J.; 6 Grandchildren - Kaitlyn O'Keefe of Bethel, CT; Tiffany O'Keefe, Shaun O'Keefe, Brittany O'Keefe and Steven Burbank, all of North Adams; and Nicholas Bergeron of Adams; 1 Great Grandson - Keegan Sunn of North Adams; and several nieces, nephews, grandnieces & grandnephews. She was predeceased by a sister, Helen Dickson. Funeral services will be held on Friday, February 23rd, at 10:00 AM in the PACIOREK FUNERAL HOME, 13 Hoosac St. Adams. Rev. R. Ellen White, Priest-in-Charge of St. Mark's Episcopal Church, Adams, will officiate. Burial will be in the spring in Southview Cemetery, North Adams. Calling hours are Thursday from 4 to 7 PM at the funeral home. Flowers may be sent, or memorial donations may be made to any charity of the donor's choice through the funeral home.

The family of Carol O'Keefe-Stachura created this Life Tributes page to make it easy to share your memories.

Send flowers to the O'Keefe-Stachura family.