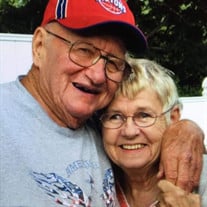 Mrs. Beverly A. (Church) Samson, 91, of Adams, was reunited with the love of her life when she passed on, Friday, October 8, 2021, at Craneville Place in Dalton. She was born in St. Albans, VT on March 20, 1930, a daughter of the late Clyde and Clara (LaFrance) Church. It was in VT that she met and married her late husband, Roland A. Samson whom she shared a life with for sixty-three years, until his passing in 2013. Together, they relocated to Adams with their young family in the late 1950s, making this community their forever home. For a time Beverly worked as a nurse’s aide for the former Adams Rest Home, however, she was most proud of her role as a foster mother to many children for nearly 30 years. Her door was always open to help someone in need and was known for her generosity, hospitality and a love for cooking for others. She enjoyed spending her summers camping with family and friends. She was a communicant of the Parish of St. John Paul II at Notre Dame des Sept Douleurs Church, Adams and was a member of the Adams Senior Center. She is survived by five sons, David Samson and his wife Tina, Christopher Samson and his wife June, Michael Samson and his late wife Irene, John Samson and his wife Tammy, all of Adams and Robert Brown of Florida, MA; her daughter Courtney Choi and her husband Peter of Hawaii; her sister Patricia Paxman and her husband Larrance of Swanton, VT; thirteen grandchildren, eleven great grandchildren and many nieces and nephews. She was predeceased by five brothers; Edwin, Vernon, Lawrence, Ralph and Charles Church and by a sister Rosemary Hampson. The funeral will be held on Saturday, October 16th at 1:00 P.M. in the PACIOREK FUNERAL HOME, 13 Hoosac St., Adams. Burial will be at a later date. There are no calling hours. Memorial donations may be made to the Adams Council on Aging, 3 Hoosac St., Adams, MA 01220 or to St. Jude Children’s Research Hospital, 501 St. Jude Place, Memphis, TN 38105.

Mrs. Beverly A. (Church) Samson, 91, of Adams, was reunited with the love of her life when she passed on, Friday, October 8, 2021, at Craneville Place in Dalton. She was born in St. Albans, VT on March 20, 1930, a daughter of the late Clyde... View Obituary & Service Information

The family of Mrs. Beverly A. Samson created this Life Tributes page to make it easy to share your memories.

Send flowers to the Samson family.