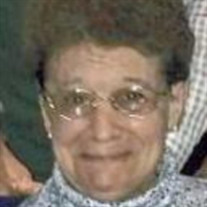 Beverly A. Herzog, 78, of Adams, died on Tuesday, March 2, 2021 at Baystate Medical Center in Springfield. Bev was born in Adams on October 26, 1942, daughter of the late Lawrence and Esther (Kleiner) Herzog. A graduate of Adams Memorial High School, she was a communicant of the Parish of St. John Paul II, Adams. Never defined by physical limitations and with a spirit that can only be described as fiercely independent, Bev was a distinguished athlete. She captured both gold and silver medals while representing Team USA at the International Cerebral Palsy Games – the forerunner to today’s Paralympic Games – in 1980 (Holland), 1982 (Denmark), and 1984 (New York). Her athletic exploits gave Bev the opportunity to travel the world, meet other international athletes, and even shake hands with sitting President Ronald Reagan. She was inducted into the Berkshire County CP Sports Hall of Fame in 1982 and named a Charter Lifetime Member in the United States Cerebral Palsy Athletic Association in 1986. Bev was a dedicated member of the Williamstown Grange, and found great joy in remaining active in the organization with her many long-time friends and colleagues. She was awarded the Degree of Ceres by the National Grange in 2008. She is survived by her brother Gary Herzog and his wife Rebecca of Cheshire; three nephews, Joseph Herzog and his wife Leigh, Jarrad Herzog and his wife Breanna, and Austin Herzog and his significant other Caity McHale; one great niece, Lucille Herzog; and by many cousins. A graveside service will be held on Saturday, March 6th at 11:00 A.M. in Bellevue Cemetery, Adams. Per current restrictions, all attending must wear a face covering and practice social distancing. There are no calling hours. Memorial donations may be made to the Williamstown Grange, 671 Cold Spring Road, Williamstown, MA 01267.

Beverly A. Herzog, 78, of Adams, died on Tuesday, March 2, 2021 at Baystate Medical Center in Springfield. Bev was born in Adams on October 26, 1942, daughter of the late Lawrence and Esther (Kleiner) Herzog. A graduate of Adams Memorial High... View Obituary & Service Information

The family of Miss Beverly A. Herzog created this Life Tributes page to make it easy to share your memories.

Send flowers to the Herzog family.