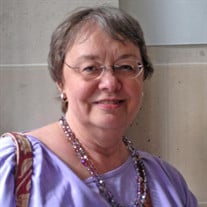 Beverly Ann Fourier passed away suddenly on Saturday, Feb. 1, 2020 at the age of 74. Born in the small town of Adams, Massachusetts on April 25, 1945, daughter of the late Joseph and Stella (Morys) Banas, she attended local Adams schools. Her early love for history, art, foreign languages, and foreign cultures set the stage for her adulthood. Beverly spent three years at Boston University, where she studied Russian, Polish, and French, followed by one year at the Sorbonne in Paris, in a “pension” for French students. She graduated Boston University cum laude with a B.A. in Romance Languages & Literature. In 1967, she married the late George Fourier, whom she met at Williams College while still in high school, and who was studying Russian and Polish. They both attended Stanford University for their masters degrees, and they spent two academic years in communist Poland through the Stanford exchange program. George then joined the U.S. Foreign Service. Beverly accompanied him to his posting to Tehran, Iran for 1972-74, and then to Moscow, U.S.S.R. for 1974-75. In July of 1975, Beverly was medivacked out of Moscow with her infant son Jason, who was born with spina bifida. George received a compassionate transfer back to the U.S., and they purchased a house in Arlington, VA. Their last Foreign Service posting was to Warsaw, Poland, after which their marriage did not last. In 1979, Beverly returned to the house in Arlington, where she lived the rest of her life. Back in Arlington, Beverly earned an Education Specialist degree in Counseling and Human Development at George Washington University. Her first job after this was at Arlington Hospital in the alcohol treatment unit. A volunteer there encouraged her to apply to the Central Intelligence Agency’s Office of Medical Services. After a short time there, she was compelled to transfer to the Directorate of Operations. She spent 15 years there, employing her language and counseling skills for fascinating and intriguing work. In 1999, Beverly’s doctor ordered her to retire on disability, due to lung damage caused by environmental contamination. She spent the remaining years of her life reading, writing, researching, and giving talks, mostly on psychological, mythological, or art subjects, at the Jung Society of Washington, D.C. Joining a local writers’ group, she authored a blog on the current accomplishments of women in the world. Her lung condition inspired her to become an active member of the Chemical Sensitivity Disorders Association, uniting people with similar conditions. She enjoyed gardening, swimming, traveling, visiting museums, and attending cultural events. She was a devoted mother and a warm and beloved friend. She is survived by her only son, Jason Fourier of Los Angeles, CA, and her older brother, Kenneth Banas of Baldwinville, MA. Funeral services will be held on Saturday, October 3rd, at 10:00 AM in the PACIOREK FUNERAL HOME, 13 Hoosac St. Adams. Burial will follow in St. Stanislaus Cemetery, Adams. Relatives and friends are invited. Due to current public health regulations, use of face masks and social distancing will be strictly enforced at the funeral home and cemetery. For the complete obituary, of for directions, please go online to www.paciorekfuneral.com

Beverly Ann Fourier passed away suddenly on Saturday, Feb. 1, 2020 at the age of 74. Born in the small town of Adams, Massachusetts on April 25, 1945, daughter of the late Joseph and Stella (Morys) Banas, she attended local Adams schools. Her... View Obituary & Service Information

The family of Beverly A. Fourier created this Life Tributes page to make it easy to share your memories.

Send flowers to the Fourier family.