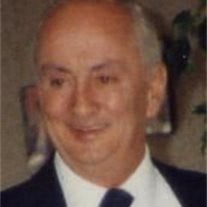 Mr. Bernard Charles Schneider, 73 , of 9 Elm St. Adams, a longtime Adams businessman, died early Monday morning at Sweet Brook Care Center in Williamstown. He was born in Adams on October 9, 1932, a son of the late Joseph and Antonia (Wabnig) Schneider, and attended Adams schools, graduating from the former Adams High School. Mr. Schneider first worked as an apprentice electrician for his father at the former Schneider Electric in Adams for several years, until he obtained his license. He earned his Master electrician's license at the age of 22, and at the time was the youngest Master Electrician in Massachusetts. In March of 1961, he founded Greylock Electric in Adams, which he owned and operated until 1998, when he became a consultant for the business. He was a communicant of the Parish of Notre Dame & St. Thomas Aquinas, Adams. He was a Shriner and a member of the Berkshire Lodge of Masons and Berkshire Shrine Club. He was a member of the Berkshire County Sheriff's Association. He was an avid hunter and fisherman. He is survived by his wife, the former Carol A. Brodeur, whom he married on October 23, 1954; 2 sons - Ronald M. Schneider of North Adams; and Michael D. Schneider of Adams; 2 daughters - Katherine J. Clark of North Adams; and Lynn M. Love and her husband, Keith, of Adams; 2 Brothers - Harold Schneider of Merrimack, New Hampshire; and Joseph Schneider of Deltona, Florida; 2 Sisters - Marlene Clarke of Rockland, Illinois; and Marie Thurman of Clearwater, Florida; 12 Grandchildren, 4 Great Grandchildren, and several nieces, nephews, grandnieces & grandnephews. He was predeceased by a brother, Calvin Schneider, and a sister, Elaine Stein. The funeral will be held on Saturday, October 15th, at 11:00 AM from the AUGE-PACIOREK-SIMMONS Funeral Home, 13 Hoosac St. Adams, followed by a Liturgy of Christian Burial at 12 Noon in Notre Dame des Sept Douleurs Church, Adams. Burial will follow in Bellevue Cemetery, Adams. Calling hours are Friday, Oct. 14, from 4 to 7 PM at the funeral home. Memorial donations may be made to the Sweet Brook Care Center Patient Activities Fund through the funeral home.

The family of Bernard C. Schneider created this Life Tributes page to make it easy to share your memories.

Send flowers to the Schneider family.