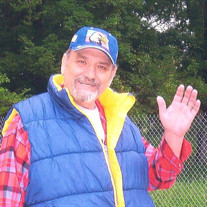 Mr. Benjamin L. Pindick, 74, of Adams, died Wednesday morning, February 5, 2020 at his home. He was born in Adams on June 22, 1945, son of the late Isadore and Ruth (Smith) Pindick. He attended schools in North Adams and Williamstown, graduating from Mt. Greylock Regional High School. Ben last worked as a chef at the Holiday Inn in North Adams until his retirement. Earlier, he had operated the former Munchin’ Out Deli in Adams; and had worked as a police officer for the Town of Bennington, VT. He also worked as a bodyguard for several celebrities and dignitaries while they visited Williamstown, and had worked security for several local nightspots. He also had a small part in the 1969 movie “Alice’s Restaurant”. He was an honorary member of the Bennington Rural Fire Department, and was a member the Weekend Warriors Van Club. He enjoyed trips to Lake George, van rallies, fishing, and was a connoisseur of fine food. He was a collector of wolf memorabilia, and especially enjoyed time spent with his family. He is survived by his wife, the former Kathy S. Monette, whom he married on July 14, 1989; one son, Jeffrey Regan and his wife, Susan, of Colonie, NY; two daughters, Jennifer Billert and her husband, Brian, of Bennington, VT., and Robin Bates and her husband, Randy, of Pownal, VT; one sister, Gail Giorgi of North Adams; seven grandchildren- Ashlee, R.J., Rylie, Keleigh, Braeden, Rien and Kevin; two nephews, Alan and Neal Giorgi; and his special friend and caregiver, Heath DelRatez. He was predeceased by his parents, Isadore and Ruth Pindick; and his brother-in-law, John Giorgi. A celebration of Ben’s life will be held on Wednesday, February 12th, at 1:00 PM in the PACIOREK FUNERAL HOME, 13 Hoosac St. Adams. Calling hours are Wednesday from 11:00 AM until 1:00 PM at the funeral home. Burial will be at a later date. Memorial donations may be made to the funeral home to help defray funeral expenses. To leave a message of condolence, please go online to www.paciorekfuneral.com

Mr. Benjamin L. Pindick, 74, of Adams, died Wednesday morning, February 5, 2020 at his home. He was born in Adams on June 22, 1945, son of the late Isadore and Ruth (Smith) Pindick. He attended schools in North Adams and Williamstown,... View Obituary & Service Information

The family of Mr. Benjamin L. Pindick created this Life Tributes page to make it easy to share your memories.

Send flowers to the Pindick family.