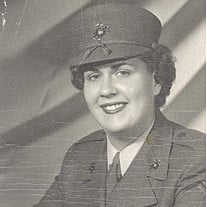 Mrs. Barbara J. (Kreiger) Scott, 84, of Dalton, died on Saturday, August 24, 2019 at the Mt. Greylock Extended Care Facility in Pittsfield. She was born in Pittsfield on May 12, 1935, daughter of the late Albert and Gertrude (Zahn) Kreiger. She attended schools in Pittsfield and graduated from Pittsfield High School. She was a veteran of the Vietnam War, having served with the United States Marine Corps until receiving her Honorable Discharge as Private First Class on February 10, 1956. Barb was primarily a homemaker but had worked for the former Duff & Dell’s Variety in Dalton. She was a member of the First Congregational Church of Dalton where she enjoyed singing in the choir. She was a life member, past president and past director of the Pittsfield Sportsman’s Club, past president of the Dalton Lions Club, member of the Dalton American Legion and an active member of the Dalton Senior Center. She was an avid cross stitcher, enjoyed quilting, cooking and baking. Her husband Ronald R. Scott, whom she married on November 26, 1955, died on September 19, 2006. She is survived by her two daughters, Jody Fijal and her Husband Joseph of Adams and Jolene Forgey and her Husband Michael of Lanesboro; her two grandchildren, Scott Forgey and his wife Danielle of Dalton and Heather Dubis and her Husband Thomas of Adams; five great grandchildren; Makenzie, Bella, Adalyn, Ethan and Griffin, and by many nieces and nephews. She was predeceased by an infant sister, Paula Kreiger. The funeral will be held on Saturday, September 7th at 10:00 A.M. in the First Congregational Church of Dalton, 514 Main St., Dalton, with Rev. Henry Pascual, Pastor, officiating. Burial will follow in Ashuelot Cemetery, Dalton. There are no calling hours. Memorial donations may be made to the Dalton American Legion Riders Post 155, 258 North St., Dalton, MA 01226 or to the Dalton Lions Club, P.O. Box 213, Dalton, MA 01226. The PACIOREK FUNERAL HOME, 13 Hoosac St., Adams, is in charge of arrangements.

Mrs. Barbara J. (Kreiger) Scott, 84, of Dalton, died on Saturday, August 24, 2019 at the Mt. Greylock Extended Care Facility in Pittsfield. She was born in Pittsfield on May 12, 1935, daughter of the late Albert and Gertrude (Zahn) Kreiger.... View Obituary & Service Information

The family of Mrs. Barbara J. Scott created this Life Tributes page to make it easy to share your memories.

Send flowers to the Scott family.