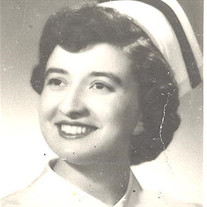 Mrs. Barbara V. (Prenguber) Keating, 87, of Adams, died on Saturday, September 14, 2019 at her home surrounded by her family. She was born in North Adams on December 13, 1931, a daughter of the late Ignazio and Viola (Crosina) Prenguber. She attended schools in North Adams and graduated from Drury High School with the class on 1949. She then graduated from the former St. Luke’s School of Nursing in Pittsfield in 1953. Mrs. Keating last worked as the Assistant Director of Nursing for the former North Adams State College until retiring in 1993. Earlier she worked as a Registered Nurse at the North Adams Regional Hospital for many years. Following her retirement she and her husband enjoyed traveling the country and bought a home in Zephyr Hills, Florida where they spend twenty one winters. She was a communicant of the Parish of St. John Paul II, Adams. She was a member of the St. Luke’s School of Nursing Alumni Association. She was a devoted wife, mother and grandmother. When her children were younger she had been a member of the Drury Moms Club for football and hosted many picnics at her home for football and little league. She loved going to beaches, attending air shows and all the attractions on the east coast. She enjoyed reading, ceramics, knitting, sewing, crocheting, quilting and crafting. She was an avid Red Sox fan and met Carlton Fisk and Johnny Pesky in 1972. She is survived by her husband of 59 years, John H. Keating whom she married on May 7, 1960 in the former St. Francis of Assisi Church, North Adams; her three sons, John H. Keating, Jr., of Orlando, FL, Paul Keating of Adams and William Keating and his significant other Kathleen Adamczyk of Lanesboro; her daughter, Dale Keating of North Adams; five grandchildren; Brett, Courtney, Kellie, Caitlin and Stephanie; one great grandson Levi; two brothers-in-law, Lloyd Keating of Uma, AZ and Robert Keating of Windsor, CT as well as many nieces and nephews. She was predeceased by a brother, John Prenguber, two sisters, Catherine Prenguber and Ida Barber and by her nephew John Prenguber. Barbara’s family would like to thank the staff of Hospice Care in the Berkshires, especially Jill, Jennifer, Stephanie, Laurie A. and Laurie J., as well as her personal caregivers, Diane Brolin and Lisa Dix. A Liturgy of Christian Burial will be celebrated on Saturday, September 21st at 12:00 Noon in Notre Dame des Sept Douleurs Church, McKinley Square, Adams, celebrated by Rev. Steven Montesanti, Pastor. Burial will be private for the family at a later date. There are no calling hours. Memorial donations may be made to the St. Luke’s School of Nursing Alumni Association through the PACIOREK FUNERAL HOME, 13 Hoosac St., Adams, which is in charge of arrangements.

Mrs. Barbara V. (Prenguber) Keating, 87, of Adams, died on Saturday, September 14, 2019 at her home surrounded by her family. She was born in North Adams on December 13, 1931, a daughter of the late Ignazio and Viola (Crosina) Prenguber. She... View Obituary & Service Information

The family of Mrs. Barbara V. Keating created this Life Tributes page to make it easy to share your memories.

Send flowers to the Keating family.