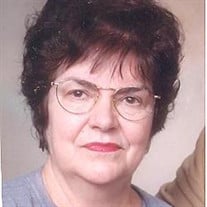 Barbara Ann “Barb” (Gagne) Greilich of Adams, passed away peacefully on September 24, 2019 after a brief illness. Born on January 11, 1932 in Adams, she was the daughter of the late Clement Gagne and Lillian (Depelteau) Gagne. She graduated from the former Adams High School in 1950. For over thirty years, Barbara was a partner with her husband Bill in the family owned meat manufacturing business located at 24 North Summer Street. Greilich’s Market specialized in manufacturing German sausages and fine quality cold cuts. In September 1998, after 50 years in the meat business, the market closed and the owners retired. Barb was also a former President of the Adams Girls Club, a Girl Scout Leader for her daughter Jan and a Cub Scout Den Mother for her son Bill. She enjoyed cooking and making French Canadian Meat pies for friends and family, and had many recipes that were published in the local newspapers. Barb also enjoyed sewing and was an avid reader. Barbara and her husband, William J. Greilich, were married on September 9, 1950 in the former Notre Dame Church. Besides her husband of 69 years, she leaves her son William Jr. and daughter-in-law Monique of Salisbury, MA and daughter Jan Goolbis and son-in-law Robert of Antrim, NH. She was beloved “Grandma” to five grandchildren, Danielle Vyas (Jay) of Concord, MA, Nicholas Greilich (Linette) of Essex Junction, VT, Paul Greilich (Erika) of West Palm Beach, FL, Robert Goolbis (Alison) of Waltham, MA and Carly Goolbis and her companion Ben Denman of Ipswich, MA, as well as three precious great grandchildren Santi and JJ Vyas and Ava Goolbis. She also leaves a brother Robert Gagne (Rocio) of Sonora, Mexico and a sister-in-law Eileen Gagne of Pawlys Island, South Carolina and many nieces and nephews, and is predeceased by her brother Clement Raymond Gagne. Funeral services will be held on Saturday, October 5th at 12:00 Noon in the PACIOREK FUNERAL HOME, 13 Hoosac St., Adams. Burial will be private for the family at a later date. There are no calling hours. Memorial donations may be made to Hospice Care in the Berkshires, 877 South St., Pittsfield, MA 01201 or the Adams Ambulance Service, 185 Columbia St., Adams, MA 01220. The Greilich family wishes to thank Hospice Care In the Berkshires for their exceptional care given to Barbara.

Barbara Ann &#8220;Barb&#8221; (Gagne) Greilich of Adams, passed away peacefully on September 24, 2019 after a brief illness. Born on January 11, 1932 in Adams, she was the daughter of the late Clement Gagne and Lillian (Depelteau) Gagne. She... View Obituary & Service Information

The family of Mrs. Barbara Ann Greilich created this Life Tributes page to make it easy to share your memories.

Send flowers to the Greilich family.