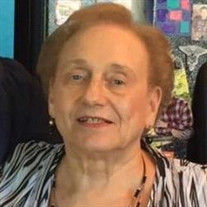 Mrs. Barbara J. (Heywood) Bednarz, 82, of Adams, died on Wednesday, March 4, 2020, at her home. She was born in Adams on December 9, 1937, daughter of the late John and Katherine (Godek) Heywood. She attended schools in Adams and graduated from the former Adams High School with the class of 1955. She then attended the Mildred Elley Secretarial School for Business in Albany, NY. Mrs. Bednarz last worked as the traffic coordinator for Specialty Minerals in Adams until her retirement. Earlier she had worked for the Adams District Court. She was a communicant of the Parish of St. John Paul II at St. Stanislaus Kostka Church, Adams. She was a member of the St. John Paul II Rosary Sodality and had served on the Adams Board of Assessors. Her husband, Victor J. Bednarz, whom she married on April 27, 1957, died on March 22, 2007. She is survived by her son, John Bednarz and his wife Karen of Adams; three daughters, Julie Russell and her husband Mark of Holden, Jennifer Quinn of West Boylston, and Vicki Shipley and her husband Steven of Bristol, VA; a son-in-law, David Skalski of North Adams; her step brother, Martin Magdalenski and his wife Ulrike of Grand Junction, CO; thirteen grandchildren, one great grandchild and many nieces and nephews. She was predeceased by her daughter, Brenda Skalski, who died on December 29, 2013. The family would like to thank the staff at Hospice Care in the Berkshires and At Home TLC, Inc., for the wonderful care they provided to Barbara. The funeral will be held on Monday, March 9th at 11:30 A.M. from the PACIOREK FUNERAL HOME, 13 Hoosac St., Adams, followed by a Liturgy of Christian Burial at 12:00 Noon in St. Stanislaus Kostka Church, Adams. Burial will follow in St. Stanislaus Cemetery. Calling hours are Monday morning from 10:00 A.M. to 11:30 A.M. at the funeral home. Memorial donations may be made to St. Stanislaus Koskta School, 108 Summer St., Adams, MA 01220 or to Adams Ambulance Service, 185 Columbia St., Adams, MA 01220.

Mrs. Barbara J. (Heywood) Bednarz, 82, of Adams, died on Wednesday, March 4, 2020, at her home. She was born in Adams on December 9, 1937, daughter of the late John and Katherine (Godek) Heywood. She attended schools in Adams and graduated from... View Obituary & Service Information

The family of Mrs. Barbara J. Bednarz created this Life Tributes page to make it easy to share your memories.

Send flowers to the Bednarz family.