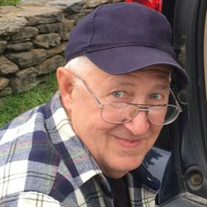 Arnold Lee Kuhner, 70, of Adams died at home on October 9, 2020 after losing a battle with cancer. Born in North Adams on March 20, 1950, he was the son of the late Charles and Loraine Giddings Kuhner. He attended schools in Adams and graduated from Adams High School with the class of 1968. He was a gentle, soft spoken man with a quiet sense of humor. He shied away from the limelight and wanted his good deeds to go without recognition or fanfare. He was forever a caregiver, taking care of his parents, mother-in-law, father-in-law and many others. He would drop everything to help a friend or even a stranger in need. At the age of 12, he sold vegetables from his garden to purchase a tricycle for his 3-year-old brother who had a heart condition which he succumbed to at the age of 4. After high school, he obtained a projectionist license and was employed by Images Cinema in Williamstown and the Mohawk Theater in North Adams, as well as several local drive-in theaters. He was a skilled carpenter, working for various construction companies. His time with these companies was spent remodeling hospitals, hotels, housing complexes and churches in Massachusetts and Southern Vermont. He enjoyed restoring antique furniture and bringing it back to its original beauty. He would sell his restorations at the Brimfield Antique Flea Market, where many of his pieces found new homes around the world. He had one grandchild, whom he adored and was so very special to him. He used to say, “Children are wonderful, but grandchildren are even better!” He enjoyed cooking, planting a garden and spending quality time with her. He also loved cheering her on in her sports, especially her swim meets. He leaves behind his wife, Nadine Candiloro Kuhner, whom he married in the former St. Anthony Church in North Adams on May 31, 1976. He also leaves his daughter, Natalia Kuhner (Jared Tatro) and his granddaughter, Bayleigh Tatro, who will forever miss her “Gumpa”. He leaves his brother Christopher Kuhner (Marjorie) of Hampton, NH and sister Eddine Fitzpatrick of Cheshire. He also leaves his brother-in-law Gene Schmehl of Williamstown as well as many nieces and nephews, including Arnie Kuhner, Kristen LaFleur and Erick Schmehl all with whom he had a special connection. Besides his parents, he was predeceased by his sister Nancy Schmehl and brother Roger Kuhner. A graveside service will be held on Friday, October 16th at 12:00 Noon in Bellevue Cemetery, Adams, there are no calling hours. Due to current restrictions, all attending must wear a face covering and practice social distancing. Memorial donations may be made to Shriners Hospital for Children, 516 Carew St., Springfield, MA 01104 or to Boston Children’s Hospital, 401 Park Drive, Suite 602, Boston, MA 02215.

Arnold Lee Kuhner, 70, of Adams died at home on October 9, 2020 after losing a battle with cancer. Born in North Adams on March 20, 1950, he was the son of the late Charles and Loraine Giddings Kuhner. He attended schools in Adams and graduated... View Obituary & Service Information

The family of Mr. Arnold "Arnie" L. Kuhner created this Life Tributes page to make it easy to share your memories.

Send flowers to the Kuhner family.