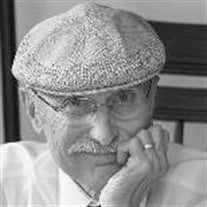 Anthony G. Mendel, 82, of Adams, died on Tuesday, October 29, 2019 following a brief illness. At the time of his passing, Mr. Mendel was a patient at Salem Hospital in Salem, MA. He was born in Adams on December 19, 1936, a son of the late Walter and Mary (Brendza) Mendel. He attended schools in Adams and graduated from the former Adams High School. Mr. Mendel was a Veteran of the Korean Conflict, having served with the United States Navy on the USS Neptune. He received his Honorable Discharge on November 1, 1957. Following his naval discharge, Mr. Mendel was employed at Pratt & Whitney in Hartford, CT. Shortly thereafter he moved back to Adams and began his career as a metal fabrication instructor at the Charles H. McCann Technical High School. He retired in the fall of 1990. Following his retirement he was employed as a part time courier for the former North Adams Regional Hospital. Tony was an avid reader and lover of the outdoors. He spent many hours walking with his faithful companion Maddie by his side. Over the past year one of his greatest joys was making weekly trips to Salem to babysit his granddaughter Kora. He is survived by his wife, the former Cynthia L. Czarnik, whom he married on August 11, 1990. In his lifetime he raised four children, Jennifer Cabana who resides with her husband Jeffrey in East Hampton, Kelly Paluck and her husband Christopher of Westfield, Melissa Burke and her husband Robert of Portland, ME and Daniel St. John and his wife Kendra of Lynn. He is also survived by his brother, Walter Mendel of Wappingers Falls, NY; eight grandchildren, Joshua, Zachary, Molly, Carly, Kevin, Owen, Mary and Kora; one great granddaughter, Emily and several nieces and nephews. He was predeceased by a brother, Robert Mendel and by a sister Lorraine Truskowski. Funeral services will be held on Tuesday, November 5th at 11:00 A.M. in the PACIOREK FUNERAL HOME, 13 Hoosac St., Adams. Burial will be private at a later date. A calling hour will precede the service, at 10:00 A.M. at the funeral home. Memorial donations may be made to Soldier On, 360 West Housatonic St., Pittsfield, MA 01201 or to a charity of the donor’s choice.

Anthony G. Mendel, 82, of Adams, died on Tuesday, October 29, 2019 following a brief illness. At the time of his passing, Mr. Mendel was a patient at Salem Hospital in Salem, MA. He was born in Adams on December 19, 1936, a son of the late... View Obituary & Service Information

The family of Mr. Anthony G. Mendel created this Life Tributes page to make it easy to share your memories.

Send flowers to the Mendel family.