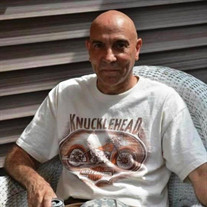 Mr. Anthony “Tony” Emard, 61, of North Adams, died on Sunday, October 20, 2019. He was born in Fall River on August 17, 1958, son of Stanislaus and Lorraine (Correia) Emard. He attended schools in Fall River and Somerset and graduated from the Somerset High School with the class of 1977. Following graduation Tony joined the Massachusetts Army National Guard as a member of the 1st/211th Field Artillery. Tony was employed by Securitas in Pittsfield and worked as a security guard for General Dynamics in Pittsfield from 2005 until the time of his death. Earlier he had worked for Home Depot from 2002 to 2005 and the Massachusetts Department of Corrections from 1981 until 2002. At the time of his passing he was an active member of the First Congregational Church in Adams where he served on the Prudential Committee and also as a Deacon. He belonged to various bowling leagues at Valley Park Lanes. He enjoyed reading, collecting bibles, and most of all, he loved watching his grandchildren play hockey and softball. Besides his parents he is survived by his three children; Shelby Emard, a student at Florida Southern College and her mother Paula Filiault of FL, Phillip Emard of Sarasota, FL and Janine Mercer of Fall River; one sister Jacqueline Davis of Dartmouth and one brother Christopher Emard of Somerset. He also leaves his stepchildren, Allen Ritcher of North Adams, Rebecca Ritcher of Florida, MA and Samantha Ritcher-Porio of the state of Florida along with 15 grandchildren his cat Cabo and his eight pet tarantulas. He was predeceased by a stepson, Daniel Ritcher in 2017. A memorial service will be held on Friday, October 25th at 5:00 P.M. in the First Congregational Church, Park St., Adams, officiated by Rev. Michael Mullany, Pastor. Family and friends are invited to attend. A gathering will be held in the church hall immediately following the service. Burial will be at a later date. There are no calling hours. Memorial donations may be made to the Shelby Emard Education Fund through the PACIOREK FUNERAL HOME, 13 Hoosac St., Adams, which is in charge of arrangements.

The family of Mr. Anthony "Tony" Emard created this Life Tributes page to make it easy to share your memories.

Send flowers to the Emard family.