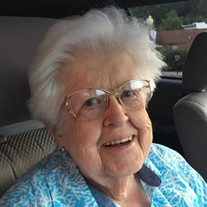 Anne McAndrews Ciuk, 96, of Adams, died unexpectedly on Sunday, June 28, 2020 at Berkshire Medical Center in Pittsfield. She was born in Adams on December 20, 1923, a daughter of the late Bartholomew and Mary Jane (Ryan) McAndrews. She graduated from the former Adams High School in 1943 and attended Bliss Business College in North Adams for two years. From 1944-1946 she served as a WAVE in the US Navy at the US Naval Barracks in Washington, DC with a rating of Seaman First Class. While serving with the Navy she attended Hunter College in New York City and State Teachers College in Cedar Falls, Iowa, and worked in the Bureau of Personnel in Washington, D.C. She is a charter member of the Women in Military Service for America. She retired as director of the town welfare department in 1985 after a long career in public service. She started as a junior clerk in 1948 and was named director of the town’s welfare department in May of 1957. In 1968, when the state took over local welfare boards, she remained as head of the department. In her retirement letter she wrote "It is time for a person who started in an office with one Underwood manual typewriter for three staff members to realize the change to a "computer on every desk" is a new direction. As exciting as these changes will be I think it is time for me to think in terms of a new direction as well." She was a communicant of the Parish of St. John Paul II, Adams, where she was a member of the Rosary Sodality and Court Sancta Regina 904 Catholic Daughters of America. She had also been a longtime communicant of the former St. Thomas Aquinas Church, Adams. She was a member of the Adams Post 160 American Legion. Her husband, Chester T. Ciuk, whom she married on October 11, 1947 in St. Thomas Aquinas Church, died on December 2, 2019. They were married for 72 years. She is survived by her daughter, Mary Ciuk of Adams; her son, James Ciuk of Weehawken, NJ; a brother James McAndrews of Attleboro; a sister, Marijane Pansecchi of Adams and many nieces and nephews. She was predeceased by her daughter Martha Stewart, who died on November 9, 2019, two brothers, John and Bart McAndrews and by a sister Rita McAndrews. Calling hours are Friday morning from 10:00 A.M. to 11:30 A.M. at the PACIOREK FUNERAL HOME, 13 Hoosac St., Adams. Due to current state and local regulations, all attending must wear a face mask and practice social distancing. We kindly ask anyone attending to be patient, as admittance to the funeral home may take a bit longer than usual. Burial will take place in Bellevue Cemetery. The family requests the omission of flowers and suggests memorial donations may be made to the Adams Council on Aging, 3 Hoosac St., Adams, MA 01220.

Anne McAndrews Ciuk, 96, of Adams, died unexpectedly on Sunday, June 28, 2020 at Berkshire Medical Center in Pittsfield. She was born in Adams on December 20, 1923, a daughter of the late Bartholomew and Mary Jane (Ryan) McAndrews. She graduated... View Obituary & Service Information

The family of Anne McAndrews Ciuk created this Life Tributes page to make it easy to share your memories.

Send flowers to the Ciuk family.