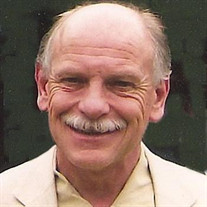 Mr. Andrew Kalisz, 67, of Adams, died on Thursday, January 31, 2019 surrounded by family. He was born in Adams on November 30, 1951, a son of the late Edward and Una (Burke) Kalisz. He graduated from the former Adams High School, class of 1969. He went on to earn a Bachelor of Arts in Music Education and a Master of Arts in Education from Goddard College in Plainfield, VT. Andy was an educator, having worked as an elementary school music teacher and librarian in the Burlington Vermont School District until retiring. Andy touched the hearts of many people through his love of music, storytelling, and humor. A voracious reader and writer, he loved to hike, play guitar, and cultivate berries and “herbs”. For a time he entertained the idea of changing his name to “Andy Chaos” and was known to fellow patrons of Leunig’s Bistro on Church Street as “Conan the Librarian”. In his later years he could often be seen at Coffee Liberation Front drinking espresso and enjoying lively conversation. Andy loved his family and was the center of any family function. He is survived by his two daughters, Corrina Bouthilette and her husband Mark of Brooklyn, NY and Dasha Kalisz of Brandon, VT; two brothers, Joseph Kalisz and his wife Linda of Pittsfield and Steven Kalisz of Adams; two grandsons, Henry and Augustus Bouthilette of Brooklyn and his beloved nieces, grandnieces, grandnephews, and extended family. In honoring Andy’s wishes, a Celebration of Life will take place on March 2, 2019 at 12 PM at the Bass Water Grill in Cheshire. Family and friends are invited to share and listen to stories and music in celebration and memory of Andy.

The family of Mr. Andrew Kalisz created this Life Tributes page to make it easy to share your memories.

Send flowers to the Kalisz family.