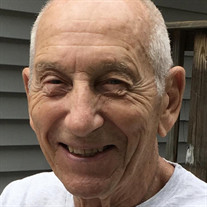 Andrew Felix Bulsa, Jr., age 90, of Nashua, New Hampshire, and Adams, Massachusetts, passed away on June 29, 2020, after a brief illness. A graduate of Adams High School, he was fondly referred to as “Handy Andy” because he could fix most anything from electrical and plumbing to automotive issues. Andy was passionate about Big Band and jazz music, counting Stan Kenton and Dave Brubeck among his favorite musicians. He also was an amazing Polka dancer, never missing an outdoor picnic dance at the Polanka in Adams. Andy was proud to have served his country as part of the peacekeeping troops in Germany after WWII. He married Mary Ann Jamula on May 19, 1954. Together they had three children and moved their family from Pittsfield to Hudson, New Hampshire, where they lived for over 25 years. As a family they often spent the summers camping, fishing, or taking day trips to Hampton Beach. Years after Mary Ann passed from leukemia, Andy reconnected with high school classmate, Stacia Ordyna, whom he married in 2008. Andy and Stacia lived part of each year in Adams, and part in Florida. They always welcomed family members to visit. Andy would cook up a Polish feast, including his famous kapusta. He always said he was blessed to have two such amazing women in his life. He was affectionate, holding their hands and sneaking up to hug and kiss them. After Stacia’s death, Andy became even more involved with the Saint Stanislaus Kostka Church in Adams, where parishioners were holding vigils and raising money to keep the church open. Andy then returned to New Hampshire, spending the final years of his life living in Nashua, near his two sons. Andrew is survived by his sister, Fran Bulsa of Adams, MA; two sons, Steven Bulsa and his wife, Donna, and Daniel Bulsa and his wife, Claudette, both of Nashua; and his daughter, Christine Bulsa-O’Meara and her husband Richard O’Meara of Portland, ME. He also leaves behind four beloved grandchildren: Michael and Matthew Bulsa, sons of Steven Bulsa and Kathryn Gaffey, and Bethany and Aubrey O’Meara, daughters of Christine Bulsa-O’Meara and Richard O’Meara. He is also survived by one great grandchild, Natalie, the daughter of Matthew Bulsa and Jessica Lynn Plant. He was predeceased by his older sister, Florence Skorupski, and his granddaughter, Rebecca Bulsa. A family burial service will be held in Adams Massachusetts on Saturday August 22 at 11:00 at the Saint Stanislaus Kostka Cemetery. There will be no reception after the burial. If you are a close friend of the family planning to attend, please adhere to social distancing of 6 feet and wear a mask as required by the state. In lieu of flowers, please send donations to the Saint Stanislaus Steeple Repair Fund, c/o St. John Paul Parish, 21 Maple St., Adams, MA 01220 (checks should be made out to the parish with a notation in the memo section stating “St. Stanislaus Steeple Repair Fund”).

Andrew Felix Bulsa, Jr., age 90, of Nashua, New Hampshire, and Adams, Massachusetts, passed away on June 29, 2020, after a brief illness. A graduate of Adams High School, he was fondly referred to as &#8220;Handy Andy&#8221; because he could... View Obituary & Service Information

The family of Mr. Andrew F. Bulsa, Jr. created this Life Tributes page to make it easy to share your memories.

Send flowers to the Bulsa, family.