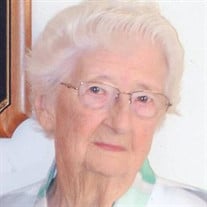 Mrs. Althea Edna (Carpenter) Maynard, 97, of Savoy, died on Wednesday, June 12, 2019 at her home. She was born in Salmon Falls, New Hampshire on August 31, 1921, a daughter of the late Forrest and Lillias (Brewer) Carpenter. She attended schools in Adams and graduated from the former Adams High School. Mrs. Maynard was the Postmaster for the Town of Savoy for many years until retiring. She was a member of the First Baptist Church, Adams, and a longtime member of the former Savoy Baptist Church. She was a member of the National Association of Retired Federal Employees and the National Association Postmasters of the United States. She had served as the secretary of the Berkshire Baptist Association, was a Berkshire representative for the Massachusetts Association of Older Americans and was a member and former chairperson of the Savoy Council on Aging. In 2001 she received the Massachusetts Secretary’s Lifetime Achievement Award from the Executive Office of Elder Affairs. In 2013 Althea completed her memoirs into a book titled “Looking Forward as I Look Back”. Her husband, Harold G. Maynard, whom she married on August 30, 1941, died on January 19, 1999. She is survived by her two sons, Robert and Paul Maynard of Savoy; her two daughters, Marlene Pavia and Beverly Maynard of Savoy; five granddaughters, four great grandchildren and many nieces and nephews. She was predeceased by her infant son, David Maynard and by her four sisters; Vida, Esther, Ruth and Patricia. The funeral will be held on Monday, June 17th at 1:00 P.M. in the PACIOREK FUNERAL HOME, 13 Hoosac St., Adams. Burial will be private in Tomb Cemetery, Savoy. A calling hour will be held on Monday from 12:00 Noon until the time of the service in the funeral home. Memorial donations may be made to the Savoy Senior Center, 720 Main Rd., Savoy, MA 01256.

Mrs. Althea Edna (Carpenter) Maynard, 97, of Savoy, died on Wednesday, June 12, 2019 at her home. She was born in Salmon Falls, New Hampshire on August 31, 1921, a daughter of the late Forrest and Lillias (Brewer) Carpenter. She attended schools... View Obituary & Service Information

The family of Mrs. Althea E. Maynard created this Life Tributes page to make it easy to share your memories.

Send flowers to the Maynard family.