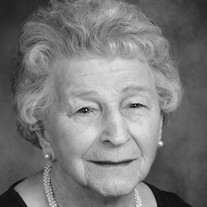 Alodia (Alice) Modzelewski Jaworski Bush passed away on October 25, 2018, at the age of 103 in Venice, FL. Hers was a long life, lived well. Alice was born on February 26, 1915, in Adams MA to Xavier and Frances Modzelewski. Her brother, Edwin, predeceased her. She graduated from St. Stanislaus Kostka School and Adams Memorial High School where she excelled as a basketball player. Her yearbook quote was, “She lives to please and pleases to live.” After graduating from Bishop Memorial School of Nursing in Pittsfield, she worked at the New York Foundling Hospital and as a private duty nurse in New York City. In 1942, she married Ernest Jaworski also of Adams. He predeceased her in 1957. For several years Alice worked as Board of Health nurse for the town of Adams and school nurse at St Stanislaus Kostka and Notre Dame Schools in Adams. In 1966 she married Louis Bush of Greenfield MA, joining two families together. Lou and Ernie attended the University of Massachusetts together and were teammates on the 1933-34 only undefeated UMass basketball team. Lou and Alice enjoyed 34 years together. They travelled extensively throughout Europe, North Africa, and the United States including Hawaii and Alaska. They also spent more than 20 winters in Pompano Beach, FL. Lou passed away in 2000 and in 2004 Alice moved to Linden Ponds in Hingham MA where she continued to be an excellent bridge player and an avid Red Sox fan. At age, 101 she moved to Venice FL where she lived with her daughter, Jane Gallivan. Alice is survived by her daughters Frances (Francis) Rysz of Harwich MA and Venice FL, Alice (William) Iacuessa of Wellfleet MA and London, England, and Jane Gallivan of Venice FL. Her son-in-law Daniel Gallivan predeceased her. She is also survived by her grandchildren Michael Iacuessa, Steven (Teri) Rysz, Christine (Brian) Grigsby, Thomas (Ann) Gallivan and Sean (Ondrea) Gallivan along with five great grandchildren. She is also survived by her stepchildren Shirley Bontempi of Greenfield MA, Mary Jane (Richard) Kamper of Milford MA, and William (Ann) Bush of Swampscott MA, several step-grandchildren and step-great grandchildren. She is also survived by her brother-in-law George Bush of Turners Falls MA. Two of her stepchildren and two of her sons-in-law predeceased her, Louis Bush Jr. and Jean Campbell and John Campbell and Russell Bontempi. The funeral will be held on Friday, Nov. 2nd, at 11:30 AM from the PACIOREK FUNERAL HOME, 13 Hoosac St. Adams, MA, followed by a Liturgy of Christian Burial at 12 Noon in St. Stanislaus Kostka Church, Adams, celebrated by Rev. Steven G. Montesanti, Pastor. Burial will follow in Bellevue Cemetery, Adams. Calling hours are Friday morning from 10:30 until 11:30, at the funeral home. In lieu of flowers, a donation may be made to St. Stanislaus Kostka School, 108 Summer Street, Adams MA. (http://diospringfield.org/SUBDOMAIN/ststansadams/)

Alodia (Alice) Modzelewski Jaworski Bush passed away on October 25, 2018, at the age of 103 in Venice, FL. Hers was a long life, lived well. Alice was born on February 26, 1915, in Adams MA to Xavier and Frances Modzelewski. Her brother,... View Obituary & Service Information

The family of Mrs. Alodia Jaworski Bush created this Life Tributes page to make it easy to share your memories.

Send flowers to the Bush family.