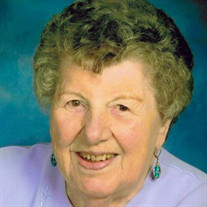 Mrs. Alice M. (Perry) Dydowicz, 93 of North Adams passed peacefully at her home on December 20, 2020. Alice was born in Winsted, CT on June 1, 1927 to the late Fred and Florence (Hurd) Perry, where she attended schools. Mrs. Dydowicz worked for many years as a cashier for the former Adams Supermarket and Big Y Supermarket in North Adams until her retirement at age 87. So many people will remember Alice on register 7 where they waited in a long line specifically to be able to have a few minutes with her. She always had a box of goodies and stickers for children and if you were lucky, you would leave with a jar of her famous raspberry jam. Alice was a longtime member of All Saints Episcopal Church in North Adams and was fond of the friendships that were formed there. When not working or knitting blankets, sweaters and mittens for all of her loved ones, she loved spending time with friends and family. As a grandmother she would often get reprimanded by her daughters for spoiling her grandchildren and as a great grandmother she could often be found holding the babies and staring at them for long periods of time. She was the proud and devoted wife of Edward Dydowicz from December 6, 1947 until the day she died even though he left this earth on March 21, 1989. Alice loved Christmas Eve and Christmas and will be able to spend this holiday with her beloved husband, brother Albert Perry of Laconia, NH and sister-in-law and brother-in-law Donald and Helen Lagess of Adams, MA who passed before her. She is survived by her four daughters, Linda Blair and her husband Robert of Cheshire, Nancy Ritter-Wixsom and her husband Charles of North Adams, Gayle Galli-Bourret and her husband Michael of Cheshire and Dayle Lic and her husband Thomas of Cheshire; her brother, Arthur Perry of Adams; seven grandchildren, Krista Bishop and her husband Lee of Florida, MA, Dana Song and her husband Tommy of Cazenovia, NY, Lyndsay Hart and her husband Bruce of Ocala, FL, Megan Pytko and her husband Robert of Adams, Brent Blair and his wife Christina of Watertown, MA, Kevin Lic and Jessica Fuller of Adams and Kolin Lic and Liz Lambert of Cheshire; ten great grandchildren, Hunter, Brooke, Elliot, Sawyer, Griffin, Remington, Maverick, April, Brianna and Weston; a sister-in-law, Louise Perry of Laconia, NH and four nieces. A graveside service will be held on Monday, December 28th at 11:15 A.M. in Southview Cemetery, North Adams. Relatives and friends are invited to attend. Due to current restrictions, all attending must wear a face covering and practice social distancing. Memorial donations may be made to All Saints Episcopal Church, 59 Summer Street., North Adams, MA 01247 or to Pop Cares, PO Box 482, Williamstown, MA 01267.

The family of Mrs. Alice M. Dydowicz created this Life Tributes page to make it easy to share your memories.

Send flowers to the Dydowicz family.