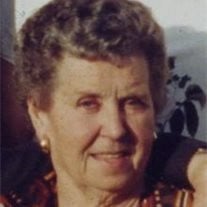 Mrs. Alice Frances (Cwalinski) Baczek, 79, of 38 Burt St. Adams, died early Thursday morning at Sweet Brook Care Center in Williamstown. She was born in Adams on February 6, 1926, a daughter of the late Alexander and Kamilia (Demby) Cwalinski, and attended Adams schools. Mrs. Baczek worked for several years at the former Berkshire Fine Spinning Co. in Adams, and after the mill ceased operations, worked for several years at the former Arnold Print Works in Adams. She was a communicant of St. Stanislaus Kostka Church, Adams, and was a former member of the Children of Mary Sodality there. She is survived by her husband of 47 years, Ferdinand "Fred" Baczek, whom she married on September 6, 1947; 3 Daughters - Barbara Stevens and her husband, Charles, of Destrehan, Louisiana; Joanne Smith of Adams, and Teresa Menard of Somerville, MA; 1 Son - Steven Baczek and his wife, Holly, of Reading, MA; 1 Brother - Zygmund Cwalinski of Adams; 8 Grandchildren - Danielle and Joshua Menard; Alexandra, Nicole and Steven Baczek; and Sarah Stevens, Brandon Stevens and Melissa Hof; 3 Great Grandchildren- Skylar Stevens and Caitlin and Madison Hof; and many nieces, nephews, grandnieces & grandnephews. She was predeceased by 3 brothers - Walter, Stanley and Atty. Alexander Cwalinski; and by 3 sisters - Sophie Natoli, Gladys Rutkowski and Helen Fortier. The funeral will be held on Monday, May 2,at 9:30 AM from the AUGE`-PACIOREK-SIMMONS Funeral Home, 13 Hoosac St. Adams, followed by a Liturgy of Christian Burial at 10:00 AM in St. Stanislaus Kostka Church, celebrated by Rev. Gary M. Dailey, Director of Vocations for the Roman Catholic Diocese of Springfield. Burial will follow in St. Stanislaus Kostka Cemetery, Adams. Calling hours are Monday morning from 8:30 to 9:30 at the funeral home. Memorial donations may be made to the VNA & Hospice of Northern Berkshire or to Adams Ambulance Service, through the funeral home.

The family of Alice Baczek created this Life Tributes page to make it easy to share your memories.

Send flowers to the Baczek family.