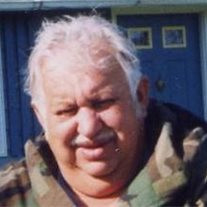 Alexander T. " Pula " Rogalski, Jr., 66, of 4 Victory St. Adams, died Thursday morning at North Adams Regional Hospital. He was born in Adams on December 20, 1938, a son of the late Alexander and Stella (Pytko) Rogalski. He graduated from St. Stanislaus Kostka Elementary School and then the former Adams High School in 1956. He served with the US Navy from 1959 until his Honorable Discharge in 1963. Mr. Rogalski last worked for the Town of Adams for 17 years, first for 15 years at the landfill operation, and then for two years at the Highway department. He retired in 1996. Earlier, he had worked for Warner Bros. Construction, and also for Petricca Construction. He was a communicant of St. Stanislaus Kostka Church, Adams. He was a member of the St. Stanislaus Kostka Society, Adams Post 160 American Legion, the Polish National Alliance, the Adams Lodge of Elks, the Mountain Club and the Adams Hound & Hunt Club. He enjoyed hunting, fishing, and mushrooming. He is survived by his longtime companion, Peggy Stefanski, of Adams; 1 Uncle - Casimer Rogalski of Bennington, VT; His Nieces & Nephews - Theodore Brown and Wayne Brown of Adams; Robert Brown of Pittsfield; Sheila Brown of Averill Park, NY; James Poplaski, John Poplaski, Elizabeth King and Donna Smith, all of Cheshire; Stanley Poplaski, Jr. of Portland, ME; Anthony Poplaski of Sevirville, TN; David Poplaski and Gerald Poplaski, both of Williamsburg, PA; and Irene Jefferson of Pittsfield; and many grandnieces & grandnephews, including Anna Rynkowski of Adams. He was predeceased by a sister, Alexandria "Sandy" Brown, and a half sister, Phyllis Poplaski. The funeral will be held on Monday, June 20th, at 9:00 AM from the AUGE-PACIOREK-SIMMONS Funeral Home, 13 Hoosac St. Adams, followed by a Liturgy of Christian Burial at 10:00 AM in St. Stanislaus Kostka Church, Adams, celebrated by Rev. Daniel J. Boyle, Pastor of the Catholic Parishes of Adams. Burial will follow in Cheshire Cemetery. Calling hours are Sunday from 4 to 7 PM at the funeral home. Memorial donations may be made to the American Diabetes Association through the funeral home.

The family of Alexander Rogalski, Jr. created this Life Tributes page to make it easy to share your memories.

Send flowers to the Rogalski, family.